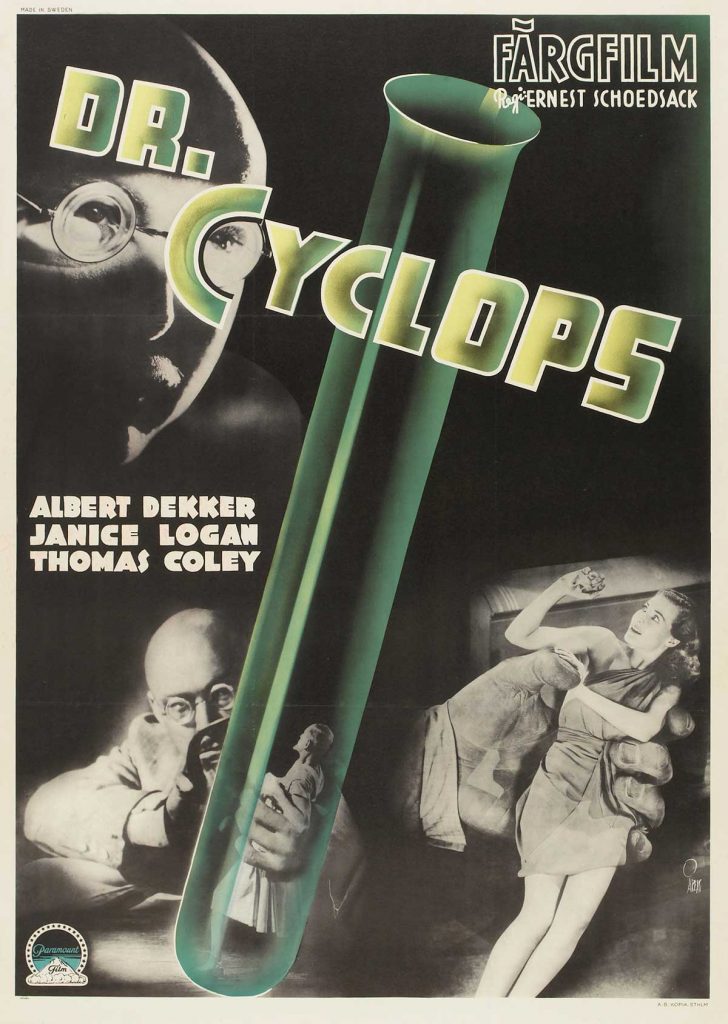 Eric McNaughton puts his glasses on for a look at a neglected gem, Dr Cyclops.

“Now you can call me ‘Cyclops’ because I have one good eye”.

In 1940 Paramount studios returned to the world of horror films. Unlike studios such as Universal, their forays into the world of what the French call cinefantastique had been few and far between. They had bagged a best actor Oscar for their first attempt (Fredric March in 1931’s Dr Jekyll and Mr Hyde) and followed it up with a trio of films in 1933 (Island of Lost Souls, Murders in the Zoo and Supernatural) but for the next 6 years they kept away.

Dr Cyclops is a real oddity. Filmed in 1939 and released the following year it has the look and feel of a typical 50s style mad scientist B movie. It is definitely a film way ahead of its time on many levels.

The plot sees Albert Dekker as Dr Alexander Thorkel, an astonishingly mad scientist even by mad scientist standards! He has holed himself up in deepest darkest Peru where he is visited by a trio of scientists he has invited. They are there at Thorkel’s request to have a look at a specimen under his microscope, since his eyesight is deteriorating. Having done so they are abruptly told to get lost!

Understandably they are more than a little peeved at this, having travelled thousands of miles to get there. They decide to stay the night and being scientists of the nosey variety decide to have a snoop round Thorkel’s encampment. They are caught mid snoop by the enraged scientist, but realizing he is outnumbered (maths being one of the good doctors strongpoints!) he has no choice but to tell them about his work shrinking live creatures.

Not surprisingly they are pretty unbelieving, although once he has locked them in his radiation chamber and shrunk them to 12 inches high they are perhaps a little less sceptical! The remainder of the film sees them trying to avoid capture from Doc Cyclops and run ins with the habitat of the Amazon (including an encounter with a cat that foreshadows that in The Incredible Shrinking Man).

The film is directed by Ernest B. Schoedsak, who, of course along with his partner Merian C. Cooper had already given audiences The Most Dangerous Game and the classic King Kong. Dr Cyclops shares a jungle setting with both those films. And another King Kong connection is the appearance of Frank Reicher as Professor Kendall. Reicher had previously played Captain Englehorn in Kong.

Acting wise the cast are pretty wooden and instantly forgettable. The exception of course is Dekker who is the glue that holds the whole film together, gloriously chewing the scenery as he rants and raves. Dekker was an excellent actor whose Hollywood career was prematurely cut short after he was blacklisted for being an outspoken opponent of rabid Senator McCarthy and his witch hunt. He went on to a successful career on Broadway and died in 1968 in most bizarre and sleazy circumstances. But here he has perhaps the best role of his career.

After a bit of a slow start the film picks up speed. At only 76 minutes there really isn’t time for the viewer to get bored. The fast moving script is by Tom Kilpatrick based on his own short story.

It has the distinction of being the first horror film made in Technicolor since Warner’s Mystery of the Wax Museum and Dr X. And how vivid the colours are! As others have noted the lush technicolor gives the film the look of a 30’s sci fi pulp magazine cover come to life.

And for its time the special effects are absolutely amazing. Indeed they still stand up today, nearly 75 years later and put some of today’s CGI nonsense to shame. The impressive visual effects were by Farciot Edouart and Gordon Jennings who used a combination of split screen, rear projection, miniatures, oversized props and forced perspectives to produce striking and effective results. The pair were nominated for an Academy Award for their work but lost out to The Thief of Baghdad. I’m convinced that Irwin Allen must have been pretty influenced by Dr Cyclops when he came to make his TV series Land of the Giants.

The review in the New York Times perhaps sums the film up best of all:
“As a cinematic spectacle, Dr Cyclops is the best bad picture of the year, an epic of silliness and, more than that, a triumph of the process screen and the department of trick effects…..it is a pleasure to concede that Paramount have…..passed a minor miracle: a picture which is frankly terrible, and at the same time one of the most amusing of the season.”

If you haven’t already done so, do yourself a favour and check out this hidden gem! 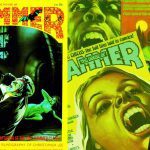