A right mish mash of exploitation flicks on the Hemisphere Horrors boxset from Severin following up from their previous Blood Island set. 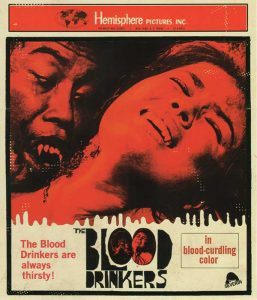 First up a duo of Filipino vampire movies directed by Gerardo de Leon – from 1964 we have Blood Drinkers (original title Kulay dugo and gabi which in the opening is obliterated by blood dripping across it). Ronald Remy makes for an effective slap-headed bloodsucker in the shape of one Dr. Marco who sometimes pops up sans his vampire getup as a cool dude in sunglasses! He plans to revive his love Katrina by swiping the heart of her still living sister Charito. Both are played by Amalia Fuentes with the simple expedient of a blonde wig. Weirdly compelling and almost Rollinesque in some of its scenes this also called to mind some of the Mexican horrors I have seen and even a touch of Night of the Living Dead (which this predates). Smoke billows as a hunchback and dwarf assistants attempt to do their masters bidding and the local Catholic priest attempts to fight back as the overly dramatic music (complete with theremin) emphasises the melodrama.

Often cited as the first colour horror pic from the Philippines this is a bit of a cheat as much of it is actually black and white footage tinted in various colours – from an atmospheric blue to a blazing red, a magenta pink to a sometimes purple and then just as suddenly into full colour. It’s all bit confusing visually!

Extras are aplenty here – Manong of the Philippines is a short interview with Dik Trofeo who was script supervisor and assistant director to Leon. Hemisphere Appreciation by Filmmaker David DeCoteau is an all too brief piece about his days in the mid 70s working at a Portland cinema where he became a fan of the Filipino exploitationers. Deleted Scenes has just a music bed with many of them tinted orange – not much to see here that would have added anything to the film. A Blood Drinkers trailer and a second scratched if wonderfully hyperbolic trailer under the alternate title of The Vampire People – “A legion of undead creatures rises from their bloody coffins! Human Bat-Fiends Claw Their Way to New Terrors!”. Also radio spots and two commentaries which I must admit I haven’t availed myself of as yet – one from Nathaniel Thompson and Howard S. Berger and the second is a partial commentary in the ongoing series of yak tracks from Samuel S Sherman who worked as marketing consultant for Hemisphere. 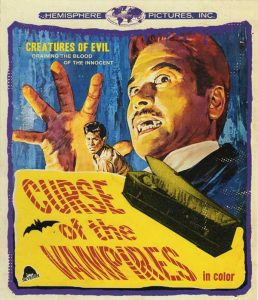 1966 brought us Curse of the Vampires (Ibulong ma as hangin /Blood of the Vampires) which stars Amalia Fuentes once again as sister to Eddie Garcia (a prolific actor who has over 600 credits to his name he is still probably best known – at least in the West – as appearing in the Blood Island movies). They return home to find their father ill and their mother – who they thought was dead – is a vampire held up in the basement.

Much like The Blood Drinkers, this escapade is melodramatic to the point of cheesiness (especially in the love scenes) however the gorgeous and colourful cinematography goes some way to compensate for the arch acting, as areas are bathed in primary colours. As writers we often cite Mario Bava when speaking about such photography – would a director like Leon necessarily have been aware of his films? Or is it just a useful shorthand on our part?

One aspect that might upset modern sensibilities – the domestic staff are played by actors in blackface – this is discussed and much else on the interesting and fact filled audio commentary from documentarian Andrew Leovold as he professes his love for, and shows his expertise in, Filipino films.

Other extras are a jovial chat with star Eddie Garcia (The Cursed Vampire); The Market of Hemisphere – a fascinating interview with marketing consultant Samuel S Sherman covering the history of Hemisphere, how they sold their movies and how he went to work with director Al Adamson and IIP (Independent-International Pictures). Sherman also features on another instalment of his ongoing commentary chats – this one is the conclusion of this multipart history (you will need to also have the Blood box from Severin in order to hear all he has to say).

Also there are Deleted Scenes – which have no English dialogue as they were cut prior to the export version being made. As with most of these it is not difficult to see why they were excised. A scratched up trailer and a radio spot for a Beast of Blood/Curse of the Vampires double bill rounds things out. 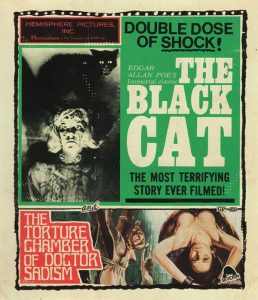 We are in Edgar Allan Poe territory with this 1966 adaptation The Black Cat (though the titles mispells his name).

If you grew up with the Denis Gifford book A Pictorial History of Horror Movies (as I did) then this is the movie of one of those images within the book that you probably peered at and thought “I’ll probably never see this movie but it looks intriguing”. It showed (in black and white) a blonde woman with a hammer in her head and blood dripping down her face! Well, this is that movie…

On the first anniversary of their marriage Diana (Robyn Baker) gives her somewhat annoying husband Lou (Robert Frost) a black cat. He becomes convinced the moggy is possessed and eventually gouges it’s eye out and ultimately hangs it and it and electrocutes – you just know things and going to go from bad to worse and the treatment of the kitty looks more than a little iffy.

Shot in crisp black and white in Texas this is not – as the poster declares “The Most Terrifying Story Ever” – not even close though it is nice to be able to tick it off the list, as it were, and it does have some quite striking imagery in amongst the rather mediocre acting.

Despite a short running time this feels really slow and is padded out (as many low budget horror films often are) with music interludes with a band – in this case with one Scott McKay and his backing musicians. The singer hailed from Dallas and apparently had already had a fairly long career in the music industry having been in Gene Vincent’s Blue Caps as a backing vocalist from the late 50s. Should you care to track it down The Theme from The Black Cat was even released as a single in 1968 on the flip-side of a cover of The Yardbirds The Train Kept a-Rollin.

The print presented here is good for the most part with some damage – and some inserts (including the opening poem) have clearly been edited in from an inferior source.

Torture Chamber of Dr Sadism (1967)
Torture Chamber of Dr Sadism is one of those productions that goes by numerous titles (you know the sort of film where you watch it under one title then years later realise you are watching the same film when it pops up under a different nom de plume). Alternate titles include Blood of the Virgins, Snake Pit, The Torture Room, Castle of the Walking Dead and, perhaps most appropriately The Snake Pit and the Pendulum – for we are again in Poe territory with an apparent version of The Pit and the Pendulum. This one is from Germany and is directed by Harald Reinl, better known for helming various Edgar Wallace adaptations amongst his long career.

Whilst this originated in Germany this plays more like an Italian gothic with a dash of the Corman Poe’s and a smattering of Hammer about it. Christopher Lee is the nominal star here as Count Regula, who in the opening is publicly and brutally executed for the death of 12 virgins foiling his plans of immortality. Of course he threatens to return to wreak revenge on the descendants of those who have condemned him (and eventually he does pop back up in the last half hour). 35 years later wouldn’t you know but four travellers end up at the ruined castle of the Count – the handsome Roger Mont Elise (played by the dashing former Tarzan Lex Barker) is the son of the head of the tribunal that sentenced Regula to die and he is joined by Baroness Lilian Brabont (Karin Dor), daughter of the girl who would have been the thirteenth victim of the evil sorcerer. Both have been invited there and arrive with the Baroness’ servant (Christiane Rücker) and the priest Fabian (Vladimir Medar who reminded me of Andrew Keir’s Father Shandor in Dracula Prince of Darkness).

The undead servant of our long dead miscreant – one Anatol (Carl Lange) – has plans to revive his master and inevitably our females figure in this scheme. Can our hero and the cleric save them? Inevitably they must face the now revived Regula, with Lee channelling his best Dracula mode and Karin Dor getting more and more histrionic as the over the top music punctuates proceedings and the over loud dubbing is matched by the emphatic foley work.

That being said there is much to enjoy here – it’s a shame that the obviously colourful production isn’t better represented here as the Blu Ray is culled from two 16mm prints neither of which appear to be in great shape so it is difficult to judge just how successful the cinematography is. There are atmospheric and freaky scenes like the one in the forest with body parts hanging from the trees, plus ones with spiders, snakes and even vultures! The sets, whilst rather theatrical, are stylishly done with their Heironymus Bosch inspired paintings. And yes we even eventually get a swinging blade in the torture chamber. 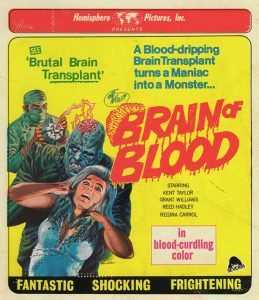 Last up is Brain of Blood which the back cover blurb declares came into being as “By 1971, drive-ins across America were clamoring for a new Blood Island movie”.

Unfortunately it seems that the original Filipino filmmakers were otherwise occupied so Hemisphere asked writer/producer Sam Sherman to come up with a movie in the style of and he in turn worked with auteur of trash Al Adamson to deliver this slice of schlock to unsuspecting audiences. Amir the leader of a place Kalid is dying of cancer; he is brought to the States in order for the requisite mad scientist to transplant his brain into a healthy body. Inevitably, as is the way in sci fi/horrors, things go wrong and the grey matter ends up in lumbering lunk instead.

The great cast includes The Incredible Shrinking Man himself Grant Williams, one Zandor Vorkov (who was born with the rather more boring name of Roger Engel), Kent Taylor as the mad doc, who had previous having been Hemipshere’s Brides of Blood, John Bloom as the receiver of said transplant (he had been the monster in Adamson’s Dracula vs Frankenstein), the diminutive Angela Rossitto (best known for 1932’s Freaks) and of course Regina Carrol (Mr’s Adamson). Despite this cracking collection of thespians this is the usual mix from director Adamson with a plot that makes little sense and all the elements for a silly schlock ‘classic’! Crappy make up fx, variable acting, dodgy scientific practices, a dwarf lab assistant, banks of flashing lights bleeping and blooping for no other reason than it looks cool, an overactive music score, a dungeon with girls chained up, a less than thrilling car chase, badly staged fight sequences, the least realistic prop you’ll probably ever see, a poorly realised monster all wrapped up in a comical cinematic concoction. What’s not to like? If you are fan of Adamson’s then you know what you are getting into!

You also get another partial commentary with Sam Sherman; a trailer and a radio spot. 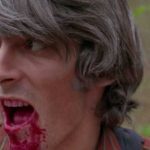 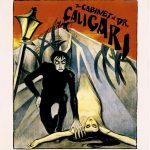