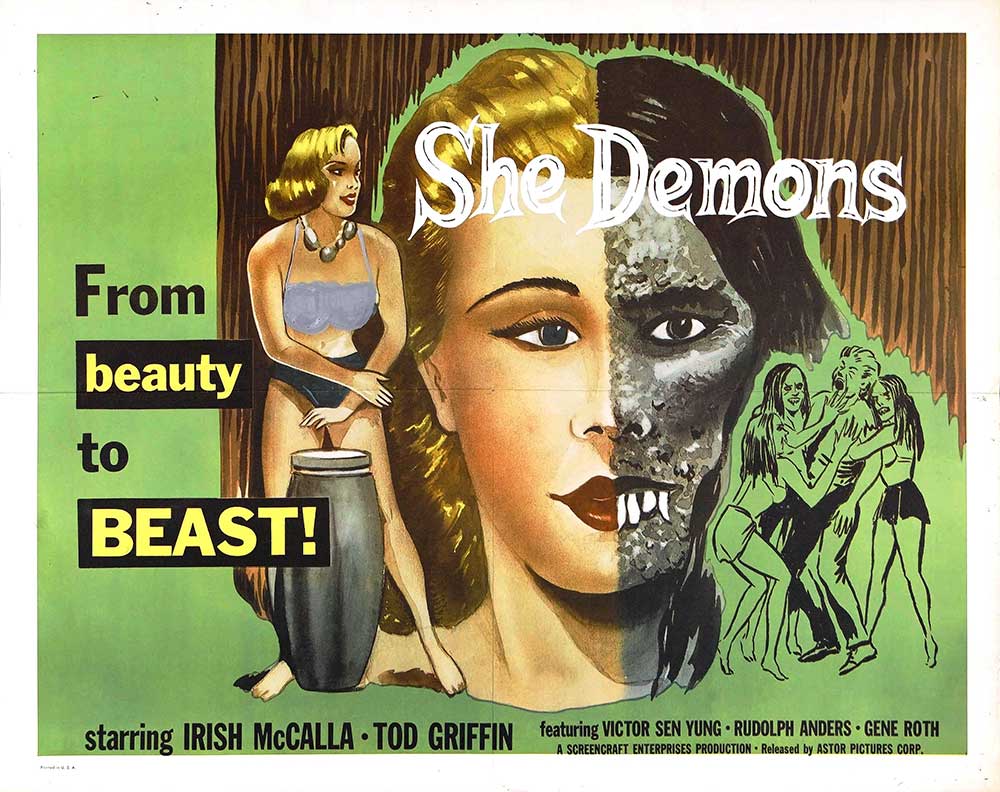 Currently available for free on Amazon Prime – the subtitle used usefully informs that this is “the original schlock classic”… well its certainly schlock but classic might be stretching a point.

As the drums beat out over the opening titles stock footage shows a tv news report on Hurricane Emily causing destruction. Cut to four survivors washed up on an uncharted island including the pouting and complaining Jerrie Turner played by Irish McCalla in her first film role after finding fame on tv in Sheena: Queen of the Jungle.

Our macho hero is Fred Maklin (played with straight face by Tod Griffin) plus his sidekick Sammy Ching (Victor Sen Yung, seemingly having a good time with his role) and the superstitious Kris Kamana (Charles Opunui)

A typically cheap 50s time-waster this was directed and co-written in 1958 by Hawaiian born Richard E. Cunha who learnt his trade in industrial films and commercials and on various tv shows. Having made Giant from the Unknown with his friend and producer Arthur A. Jacobs (not to be confused with Arthur P Jacobs who produced Planet of the Apes) they needed another film to double bill with it so Cunha obliged by cranking out She Demons – in the same year he also made two other b movies Frankenstein’s Daughter and Missile to the Moon.

After going off to explore and leaving Kris on the beach they return to find him impaled with spears – I guess the island is inhabited! Searching the beach they find the body of a woman with a grotesque face (well a cheapjack mask). “A woman’s body… with the face of a demon”, declares Jerrie. “Demon… a she-demon”, intones Fred.

Before long jungle drums lead them to spy on a group of bikini clad young ladies – their gyrations are interrupted by the arrival of a bunch of Nazi’s who round up the girls back to a tunnel (or more accurately a bunch of cardboard made to look like rocks) and an encampment of cages where the females are incarcerated.

For yes indeed we are in mad Nazi scientist experimenting on women and creating ghastly creatures territory… with Rudolph Anders clearly relishing his role as Colonel Karl Osler: the Butcher. It’s all some nonsense about turning the captured natives into scary long toothed monsters all in the hope of restoring his wife’s beauty – because that always works right?

Reaching the lower echelons of exploitation, director Cunha clearly had a “talent” for making cheesy, if enjoyable, Z grade movies. The current one under review has plenty of exploitable elements – native girls in skimpy swimwear, nasty Nazis, lousy sets, one note acting, clunky dialogue, a stunt double who looks nothing like the person they are standing in for, crappy makeup and all wrapped up neatly in a speedy 80 minutes. 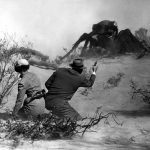