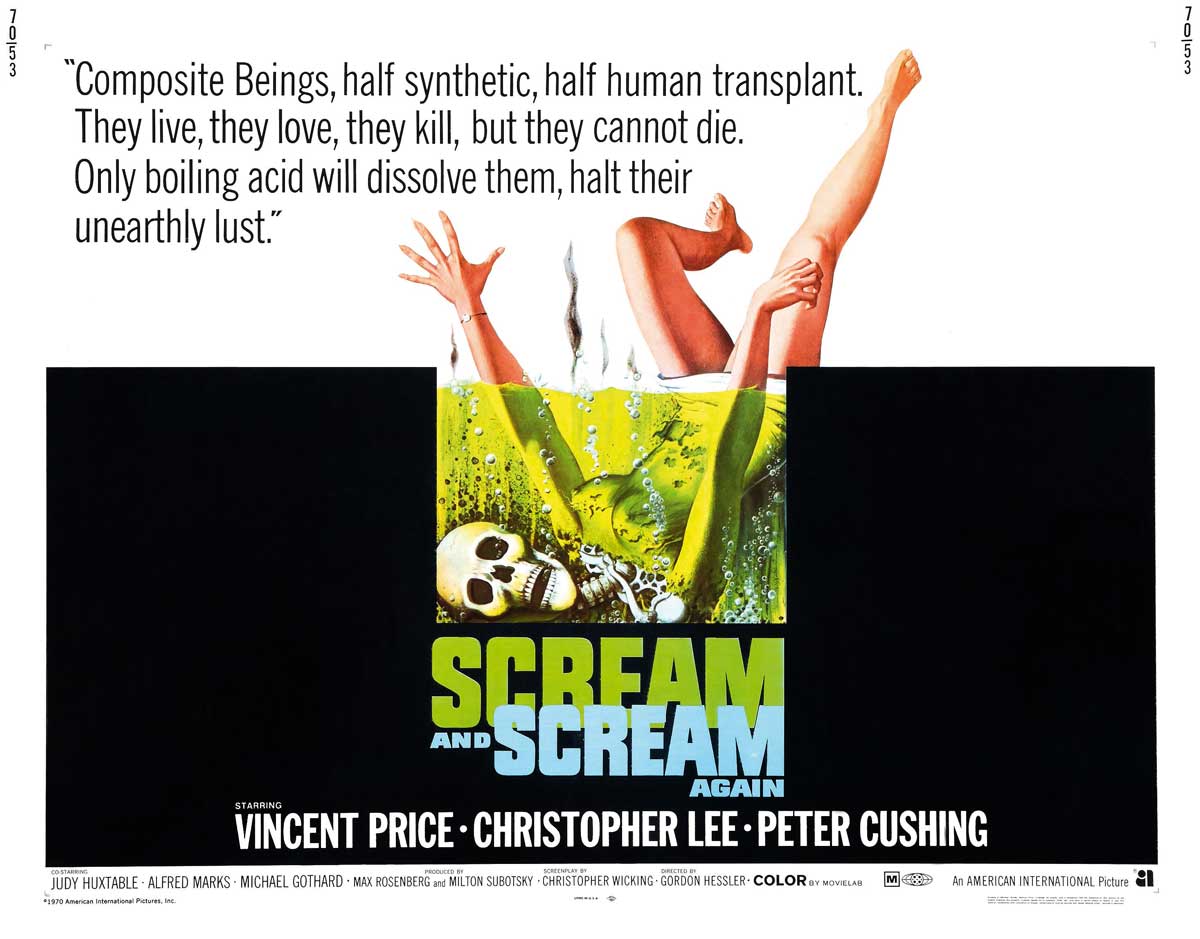 A man (Nigel Lambert) out for a run in a British park collapses, only to wake up in a private hospital room with his right leg amputated. In an unnamed fascist dictatorship, Konratz (Marshall Jones) is murdering his way to the top by bumping off military superiors Schweitz (Peter Sallis) and Benedek (Peter Cushing). Before you can say “No-one kills Peter Cushing!” he’s torturing Yutte Stensgaard with a pair of pliers as well – the utter villain! Meanwhile, back in the UK, our runner has had his other leg amputated, and the British police are baffled by a series of ‘Vampire Murders’ in which young women have been found drained of blood. They manage to catch the killer, Keith, (Michael Gothard) but he gets away, tearing his hand off to escape his handcuffs and jumping into an acid bath at the country house of ‘cancer research scientist’ Dr Malcolm Browning (Vincent Price). While all this is happening, over at MI5 government official Fremont (Christopher Lee) is taking steps to recover a pilot who has crash-landed in the unnamed fascist dictatorship we saw at the start. Konratz is now the top dog, and all he wants in exchange for the pilot is all information pertaining to the vampire killings. Back in hospital, both the runner’s arms have now been amputated. Keith’s hand seems to be made of a synthetic substance around which flesh has been grown. Everything leads back to Dr Browning’s house, which as well as having a couple of acid baths also has its own private operating theatre and a supply of body parts on ice.

That’s Gordon Hessler’s Scream & Scream Again in a nutshell, and if it sounds like a lot of plot for ninety minutes then that’s because it is. It’s also a fantastic and quite innovative film that was way ahead of its time when it was released in 1969. Superbly written, directed, photographed and executed in general, Fritz Lang apparently loved it, AIP admitted it was an ‘art house’ project, and audiences of the time scratched their heads and wondered why its top lined stars weren’t actually in it very much. Time has been very kind indeed to this particular piece of BritHorror, partly because of Hessler’s modern approach to filming that still makes it feel fresh today, and partly because there still really isn’t anything else quite like it.

Scream & Scream Again was possibly the weirdest film ever to come out of Amicus, although it should be remembered that they also made very interesting movie versions of art-house fare like Harold Pinter’s The Birthday Party and Charles Maine’s The Mind of Mr Soames. Hessler’s movie turned out the way it did because of a number of factors coming together for a once-in-a-lifetime-never-to-be-reproduced situation.

First, there was the source novel. Star Books’ The Disorientated Man was written in 1966 and then quickly retitled to cash in on the release of the film. Subsequent paperback reprints (mine is from 1972) kept the movie title, which you have to admit is a lot better. The question of who actually wrote the book is something of a mystery. “Peter Saxon” didn’t actually exist, and was a house name used as a label for their horror line. Other books by “Mr Saxon” include The Torturer, The Killing Bone and Dark Ways to Death. All are a lot of pulpy fun, and all were written very quickly to get them out onto railway station bookstalls to satisfy the commuting public’s desire for lurid entertainment. Sometimes the deadlines were so tight that several authors would work on a single book, often simultaneously. And this is where we get Scream & Scream Again’s jerky, fragmented narrative from. The book is structured exactly like the film, jumping around the world from chapter to chapter as some poor editor in a sweatshop in Soho tries to glue together the work of at least two, and possibly more, different people. Many of the character names and situations are the same in both book and film. The one major difference between the two is that in the book everything is revealed to be part of an alien invasion. I’ve often wondered if the title The Disorientated Man was simply the publisher describing how he felt once he’d read it.

Milton Subotsky wrote the original screenplay for Scream & Scream Again, keeping the aliens and making the plotline more conventional. When AIP came on board as co-producers Gordon Hessler was hired to direct, and he in turn brought in his screenwriting pal Christopher Wicking. Wicking always displayed an interesting, if not always successful, oblique writing style, that helped make Hammer’s Demons of the Mind a film that still works today, but I am sure contributed to projects like To The Devil a Daughter ending up as a right old mess. Wicking’s solution to Hessler’s request to ‘make this a bit different’ was to keep the fragmentary style of the book but, as Wicking said in an interview “lose the blobs from space”, and make everything have a more political agenda. Mix in AIP’s executive producer in London Louis M Heyward doing the quite remarkable thing of leaving his creative team to do exactly what they wanted, and as a result, Scream & Scream Again changed from what could have been another tired retread of They Came From Beyond Space, into a cold war paranoia piece that still holds up, even though audiences of the time must have wondered what on earth to make of it.

In many cases, horror fans could only have been disappointed. Aside from a story-line that audiences would not have been used to having to work at, plus an inconclusive ending, there was the added misery of being promised Vincent Price, Peter Cushing and Christopher Lee starring in a film together, only for their roles to have little to do with each other, and for each to amount to little more than a cameo. Even top-lined Price isn’t in the film very much until the end, when he gets to fight neither Cushing nor Lee but Marshall Jones and his single hand. Instead it’s left to secondary players like Christopher Matthews as pathologist Dr Sorel and the marvellous Alfred Marks (as DI Bellaver) to carry the story. Michael (“not today, lady” he says in a nice touch as Judy Bloom tries to guess his name when they leave the nightclub) Gothard is spot-on as a synthetic humanoid, the natural 1960s precursor to the kind of thing we could imagine being created for today’s boy bands. Kenneth Benda, veteran of many an odd film (Antony Balch’s Horror Hospital and Secrets of Sex, Peter Medak’s The Ruling Class) makes a splendid head pathologist and Judy Huxtable a believable victim for Keith. Her murder is especially nasty and obviously another conscious effort to move away from the gothic and into the ‘now’.

Director Hessler deliberately wanted a cinema verite style to the filming, and while hand-held cameras are almost the norm these days, back then it was rare (another notable movie in which it’s used are the crowd scenes in Ted Post’s Beneath The Planet of the Apes). You’ll notice it most in the scenes in the police station. There’s also a fantastic car chase that looks as if it uses the same piece of road that Don Sharp would use in Psychomania a couple of years later, and the scene where the first girl’s body is discovered on the common uses an ambitious tracking shot that moves up to a high angle and back down again while recording the perfectly timed (and acted) complex action.

Special mention needs to be made of the music score. David Whitaker would go on to provide lush music for Hammer’s Dr Jekyll and Sister Hyde and Vampire Circus, and he would deservedly win an award for his marvellous work on Albert Pyun’s Sword and the Sorceror. Scream & Scream Again was his first horror movie score and, like the movie itself, it reverberates with experimentation, using freeform jazz to accompany the scenes in modern swinging sixties London. There’s also a turn by pop band The Amen Corner, singing what must be one of the first horror film theme songs! When the movie was shown on television in the late 1970s (I caught it as part of ATV’s Christopher Lee – Prince of Menace season) the music score was intact. However, when it was released on home video MGM/UA, who owned the rights, decided they wouldn’t be paying royalties to English composers (how does nonsense like this ever happen?), and the film had to be rescored before it could go out. This happened with a couple of other AIP properties including, most infamously, Paul Ferris’ score to Michael Reeves’ Witchfinder General, which was wiped and replaced with the electronic doodlings of Kendall Schmidt, who also got the rescoring job on Scream & Scream Again. To be fair to Mr Schmidt, who was only doing a job he had been asked to, and who understandably came in for a hell of a bashing from Witchfinder enthusiasts, his score to Scream & Scream Again wasn’t at all bad. The rescored version became the print that played on UK television through the rest of the 1980s and 1990s and I began to wonder if I had dreamed the Whitaker version, until a pre Video Watchdog column by Tim Lucas in Gorezone magazine put me right.

Thankfully, the music issue has been resolved for the release of Scream & Scream Again on DVD and fans can now watch the film with its original score. The Schmidt music seems to have vanished, however, and that’s a shame as when I finally got to hear the Whitaker score again I (heresy!) actually preferred the redub, which is altogether more sinister while still approximating Whitaker’s experimental approach. I’ve never heard Schmidt’s score for Witchfinder and it seems to be impossible to find nowadays. A recent rewatch of Scream & Scream Again confirmed for me that jazz and horror don’t really go together (although Jess Franco would have disagreed) and there are quite a few instances where Whitaker’s score detracts from the on-screen action.

That shouldn’t stop you from checking out Scream & Scream Again if you haven’t seen it, though. Not at all like the other movies Cushing, Lee and Price were appearing in at the time, and feeling very much like an avant-garde police procedural with cold war paranoia and monsters, Scream & Scream Again remains Gordon Hessler’s masterpiece. It’s a unique piece of classic British cinema and a unique piece of classic horror. The title doesn’t really refer to anything, but you can’t have everything. Besides, if you can come up with something that’s more appropriate you’re a better person than me.