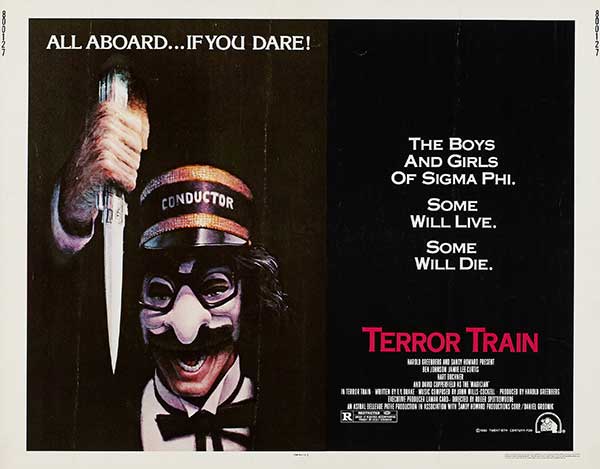 Terror Train is one of those movies I saw in part or in full several times back when it was first released as I was working at my local Odeon – I haven’t seen it since so it was good catching up with it.

A New Year’s party at a college frat house – Kenny the geeky, skinny teen thinks he is going to get laid – inevitably it is a prank and he becomes the source of fun for several of the other students.

Like many a slasher we then get a time jump – this time out it is 3 years later – a bunch of older actors pretending to be teens, including our pranksters, are boarding a train for a costume bash – “Our last big college party”.

The bloodletting starts early on then dissipates until much later as the train sets off and after lots of shenanigans with guys and gals getting together and way too much magic from the then relatively unknown prestidigitator in the shape of fresh faced David Copperfield (accompanied by funky 80s music). These extended demonstrations of sleight of hand are presumably there to extend the fairly flimsy plot.

Ben Johnson is great as the train conductor and top of the cast is Jamie Lee Curtis, already firmly established as the Scream Queen of the day. The rest of the cast are forgettable and much of the time are in costumes and masks – so its easy for our killer (guess who is) to attack’s his various victims. People are killed but you never get a true sense that there is killer on the loose – but is it Kenny taking his revenge? What do you think! 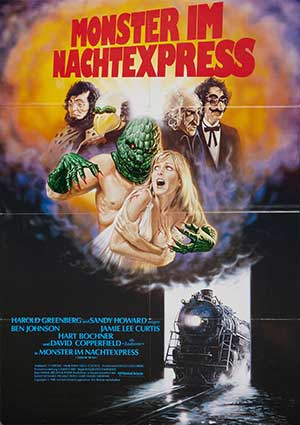 Lacking the propulsive drive of films like Halloween, this meanders along until Johnson discovers a bloody corpse in a toilet – but is it a practical joke or a real murder?

Canadian director Roger Spottiswoode – here making his debut after many years as an editor – makes good use of the enclosed setting of the train carriages (even if the train is rather too conveniently unable to contact anyone as there is no working radio on board). He is aided in his endeavours by the atmospheric minimal lighting by cinematographer John Alcott.

There is some tension in the final half hour and whilst Curtis is the nominal star she is given little to do until this suitably gory finale. Not one of the best of that period’s slashers, watching it again confirmed what I recalled from back in the day that it wasn’t great – there is however quite a nice twist at the end.

Overall, if you are a fan of Jamie Lee or a splatter completist this might be worth adding to your collection.

Extras: (some of these are ported from the Shout Factory release)
Crew Interviews:
All Aboard! With Glenn Bydwell Production Designer for Terror Train (11 minutes) – Behind the scenes chat – shots of the clapperboard show this was shot as Train to Terror.

Destination Death with Daniel Grodnik (12 minutes) – Interview with Executive Producer Grodnik touching on his films including Without Warning (1980) and also how came up with the central concept to Terror Train and how quickly it was made. Grodnik is still active today (he recently produced the “interesting” John Travolta film The Fanatic).

Murder Music with John Mills-Cockell (8 minutes) – a chat with the composer.

Riding the Rails with Don Carmody (13 minutes) – Production Executive Carmody talks about the difficulties of shooting on an actual train and about his other work on early Cronenberg’s and other exploitation movies.

Stills gallery (5 minutes) includes posters and stills with some nice behind the scenes shots.

Two new commentaries – The Hysteria Continues a comprehensive chat track with podcasters Justin Kerswell, Nathan Ferguson, Joseph Henson and Erik Threlfall and a one that is a bit more opinion based (their first apparently) with Kings of Schlocky Bobbins Dave Wain and Matty Budrewicz.

The initial run will also get a booklet about the film. 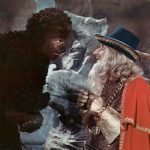 by Steve KirkhamNetwork. Blu Ray Looking at The Singing Ringjng Tree through the eyes of adulthood it is perhaps difficult to see how this clearly theatrical, archly acted fairytale was, if 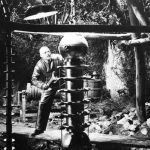