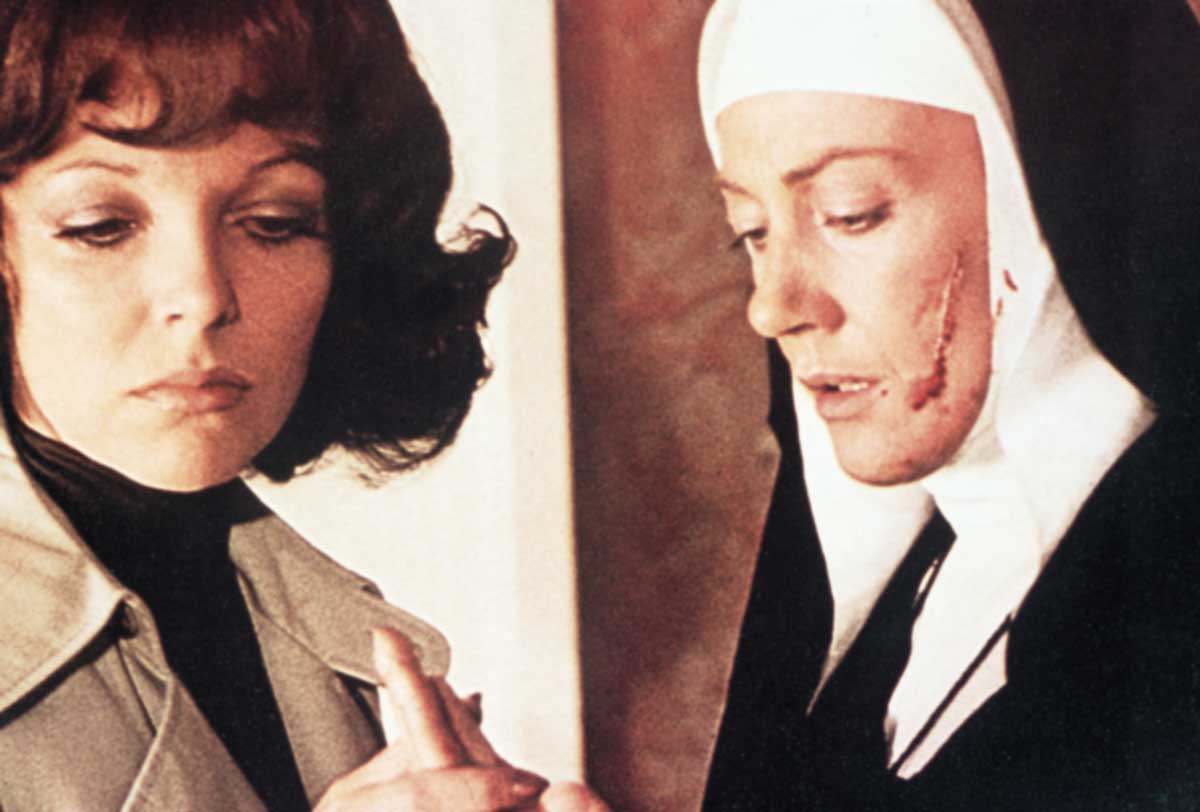 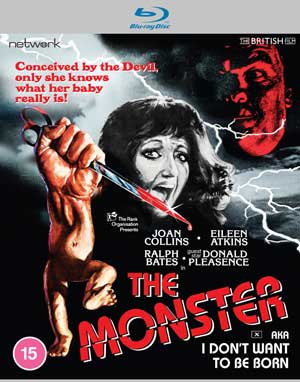 The Monster isn’t by any definition a good movie, at a stretch it is kind of trashy fun… kind of. Joan Collins stars as Lucy Carlesi, a former stripper, who has just given birth to a rather large, nearly 12 pound baby which, before long, appears to be possessed by the Devil as it seemingly bites and attacks people that go near it. When her hubby Gino comes to visit her and the new born in the hospital, Lucy is understandably distressed as she has been scratched by their son!
The husband is played by Ralph Bates, with a terrible Italian accent, for no discernible reason than perhaps to better explain why his sister, who soon turns up to help, is a nun and knows about things like Satan and exorcism! This was soon after the success of The Exorcist in 1973 and we had also had the delights of a killer baby in Larry Cohen’s It’s Alive. This British horror pales in comparison!
Caroline Munro pops up as one of Lucy’s friends from her stripper days — bizarrely she is clearly dubbed, apparently by Carry On’s Liz Fraser. We also get Donald Pleasence as the family doctor.
Collins was something of a fixture in B movies around this time — none of which probably contributed to her eventually becoming a Dame in 2015. Her films in the 70s included Tales from the Crypt and Fear in the Night (both 1972), Tales that Witness Madness (1973) and Empire of the Ants (1977).
Director Peter Sasdy was also a genre veteran, though this isn’t one of his better movies — more rewarding was his work for Hammer which included Taste the Blood of Dracula (1970) and, with Ralph Bates, Hands of the Ripper (1971)
Before long folk are turning up dead — is the sprog responsible (as you never really see it do anything) or could it be the creepy little person Hercules, who had cursed Lucy for rebuffing his advances?
This is a film that’s seems to have had numerous titles (none of them able to disguise the fact that this is a slog to view). Alongside I Don’t Want to be Born (which presumably came from the mouth of the infant after seeing the script), we have The Devil Within Her, It Lives Within Her, It’s Growing Inside Her and the perplexing Sharon’s Baby — despite the fact there is no one by that name in the story!
There are small compensations along the way with the script offering a few fun dialogue exchanges — though they are mainly amusing for all the wrong reasons and there are some nice views around London. Otherwise, despite the talent involved, this is an increasingly ridiculous and often laughable viewing experience.
Extras: Audio commentary by Laura Mayne and Adrian Smith from Second Features podcast (they sound like they are having a good time viewing the film); Sasdy’s Baby (23 mins): interview with director Sasdy; The Excisist (10 mins): interview with editor Keith Palmer who worked with Sasdy on quite a few films; Holding the Baby (14 mins): interview with continuity supervisor Renée Glynne; Alternate title sequence (3 mins) as I Don’t Want to Be Born, including the X Cert card; Theatrical trailer as I Don’t Want to be Born; Image Gallery of posters and stills including behind the scenes shots plus a limited edition booklet by Adrian Smith.
Share on facebook
Facebook
Share on twitter
Twitter