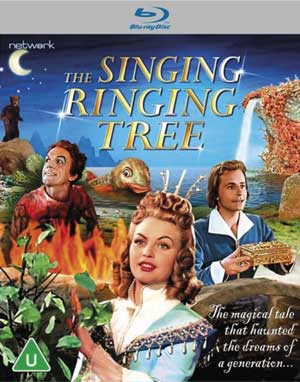 Looking at The Singing Ringjng Tree through the eyes of adulthood it is perhaps difficult to see how this clearly theatrical, archly acted fairytale was, if you are a person of a certain age, a memory of a television programme that may well have proved traumatic to your younger self. What was it about it that scarred the young psyche? Was it the rather creepy little person (are we allowed to say dwarf these days as it does in the narration?), or maybe it was the fact the prince of the story was turned into a bear? Or perhaps it was the gigantic, puppet goldfish that gave you nightmares? Or indeed the tree itself, which I was sure was all gold, glittery and spouted water (sadly it isn’t much more than a twig with leaves atop… barely constituting an example of arboreal excellence).
Overall it’s a simple tale of a prince who tries to woo a super spoilt princess and is tasked with going away and finding the titular tree. Before long he has been turned into the aforementioned bear (or at least a rather cheap looking furry suit) and is told that it will only sing if the petulant princess truly loves him. Along the way the stroppy royal learns some life lessons and, as in all good fairytales, they all live happily ever after.
So how did this straightforward morality lesson, become so ingrained in the minds of so many children growing up. The film itself, running a sprightly 74 minutes, was created in East Germany (original title Das singende, klingende Bäumchen) and based on the story by the Brothers Grimm Hurleburlebutz (one of their lesser known works). It was a big success in its home country and the BBC bought it and duly chopped it into three parts and showed it in black and white as part of Tales from Europe in 1964. Presumably this was in-between such delights as Robinson Crusoe, Casey Jones and Champion the Wonder Horse. As I would have been 3 at the time of its first airing I must have caught it during one of the subsequent repeats in 1966, 1969, 1971, 1976, 1977 and 1980! Plenty of chances to be traumatised. One can only assume that the strange imagery and the fact that the Beeb didn’t dubbed the film (way too expensive I guess) but instead laid over a narration whilst leaving in place the original soundtrack made for strange surreal viewing.
Previously available on DVD, Network now bring this to Blu Ray with a fabulous print. You not only get the version with the English soundtrack (in 4×3 – which is the version I viewed) but also the widescreen theatrical version with German audio or alternative music-only soundtrack. Add to this on the fullscreen version you have the choice of French and Spanish soundtracks.
It’s fairly light on extras — there is a 2003 interview with Christel Bodenstein who played the princess, an image gallery and in the initial release a booklet written by cultural historian Tim Worthington.
Share on facebook
Facebook
Share on twitter
Twitter