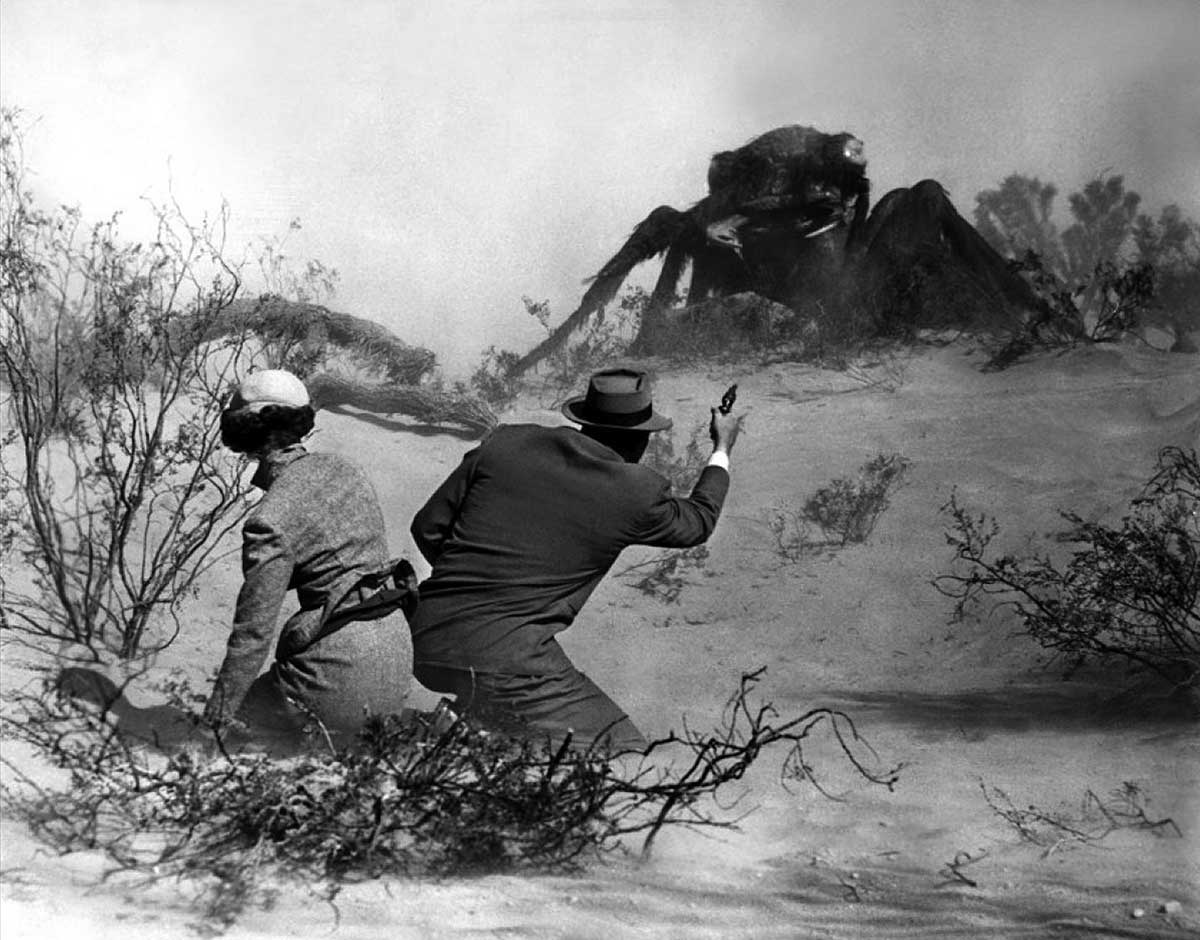 “We may be witnesses to a biblical prophecy come true..And there shall be destruction and darkness that come of the creation and the beasts shall reign over the Earth”

Picture the scene: It’s a Friday morning sometime in the early 70s and I’m sat in school trying my hardest to look interested in a geography lesson. But it’s not ox-bow lakes and waterfalls that are on my young mind. All I can think of is the film that’s advertised on Tyne Tees TV at 10.30pm that night. All it says in the local newspaper is the film’s title: THEM! What could it possibly be about? That Friday seemed to go on and on, as did the evening until finally it was time and the TV casts its magic over a young 11 year old. After all these years I can still close my eyes and I’m back there, being wowed by a classic monster movie. Of all the films I’ve seen in the years since, Them! still has a very special place in my heart and holds perhaps one of the most nostalgic and magical memories.

Them! was released in 1954 (when, by a strange quirk of fate, it coincided with a heat wave that saw an infestation of ants) and became Warner Brothers most successful film of that year grossing 2 million dollars in the US and Canada. The story is about the discovery of fifteen foot ants in the New Mexico desert, the result of nuclear testing. In a film chock full of memorable scenes, standouts include the discovery of the little girl traumatised and wandering alone in the desert; the descent into the nest; the ants hatching out on-board a ship; and the climactic scenes in the storm tunnels beneath Los Angeles.

Them! was the first of what would become a whole sub-genre in science fiction movies. Just look at all those that came afterwards – Tarantula, The Giant Mantis, Monster From Green Hell, Beginning of the End et al. But Them! stands head and shoulders (and antennae!) above them all.

It was based on a short story by George Worthing Yates, who had giant ants living in the New York subway system. Yates was involved with such favourites as It Came from Beneath the Sea, The Conquest of Space, Earth Vs. the Flying Saucers, War of the Colossal Beast and Frankenstein 1970. But the screenplay and look of the film is more due to Ted Sherdeman who wrote the script. Like its contemporaries The Day the Earth Stood Still and War of the Worlds it has the look of a documentary film, aided by the superb black and white photography by Sid Hickox.

Warner Brothers originally intended to shoot the film in colour and 3D, with the ants being a purplish shade of green, but I think the monochrome look makes the film much more effective. Studio heads slashed the budget days before filming was due to start so out went colour and 3D. The only colour sequence left is the red Them! logo in the opening credits. The abandonment of the 3D process (which had proved such a huge success for Warners with their House of Wax) left a few scenes, such as flamethrowers being fired directly at the screen and ants zooming towards the audience, intact but a bit flat. (Incidentally those flamethrowers were the real thing, standard issue World War 2 weapons used by actual US Army combat veterans.)

Steven Jay Rubin, writing in Cinefantastique says “For a Los Angeles resident it was a bit close to home watching giant ants burrow into the storm drains under the city. And the ants, for my money, were pretty realistic. Even today fans point to the movie as being one of the few wherein live action giant models work”.

Those models and effects were Oscar nominated and the work of Ralph Ayers and his team. Two main giant ants were built, one a complete insect, the other just the head and thorax. This latter was mounted on a boom for mobility and moved around by the crew who used levers to make it appear life like in its movements. In addition extra ants were constructed for some of the scenes in which a large number of the giants were required, such as the scene in the nest in the desert. These extra mechanical models consisted of only the head and antennae and motion was achieved by the use of wind machines. Sandy Descher, who played the little girl wandering in the desert, had vivid memories of the ants “I….remember the giant ants; they really mesmerised me. They were loaded on trucks; they didn’t have electronics in them – they had people in them, working the legs, you know, much like a float in the New Year’s Day parade. They were aluminium with netting over them and the hairs were glued on. They were actually quite lifelike in appearance”.

The distinctive and eerie sounds the giant ants make was produced by recording a chorus of bird-voiced tree frogs (hula avivoca) from south eastern USA. In fact the sound team won a Golden Reel Award for Best Sound Editing.

The cast was uniformly superb. James Whitmore plays Sergeant Ben Peterson, around whom the story revolves. He was on loan to Warner brothers from MGM for the film, which is perhaps the best of his career. The love interest was supplied by James Arness as FBI agent Robert Graham and Joan Wheldon as Dr Patricia Medford. Arness would subsequently find fame as Matt Dillon in Gunsmoke (he was recommended for that role by none other than John Wayne who had seen Them! and was impressed with Arness’ performance!), but is probably best remembered by fantasy film fans for playing the title creature in Howard Hawk’s The Thing From Another World. Apparently Arness’ height caused problems during filming. During his scenes in the desert with Edmund Gwenn he had to stand and walk in specially dug trenches! And in his scenes with James Whitmore, the latter actor had to wear lifts in his shoes so that they would appear the same height.

Joan Weldon was a contract player at Warner Brothers and found making Them! a pretty horrible experience due not to the ants, but the weather. The scenes in the desert were filmed in the Mojave in 115 degree heat with Weldon throughout wearing a tweed suit! It was even tougher for Edmund Gwenn who was struggling with advanced arthritis. At the other extreme, filming in the Los Angeles storm drains was “absolutely freezing”.

Edmund Gwenn was perfect as the ant specialist Dr Harold Medford, by turns funny and philosophising, absent minded, yet deadly serious. Unfortunately Jack Warner, studio head, didn’t agree, thinking him too old for the part. Ted Shendeman disagreed and stuck to his guns. Warner, in a petty move, took away Shendeman’s producing credit and replaced him with producer David Weishart, who luckily had the good sense to keep Gwenn anyway. Although you would never know from his performance, the actor was in considerable pain throughout the shooting with his arthritis.

Watch out for the drunk in the alcoholic ward who first spots the ants in the storm drains – he’s played by Olin Howard, who was also the first victim of The Blob! In a blink-and-you’ll-miss him role is Leonard Nimoy as an Air Force Sergeant. And as the “Crazy Texan pilot” is Fess Parker who went on to star as Davy Crockett for Disney. (In fact Walt Disney had requested a special screening of the film as he was interested in casting James Arness as Crockett, but he was so impressed with Parker’s short role in Them! he gave him the role instead).

Playing the little girl whose only line gives the film its title, was Sandy Descher. Recalling those early eerie shots in the desert many years later in an interview with Filmfax magazine (Issue 91, 2002), Descher remembers “The shot was difficult because of the weather. It was very hot in the desert and we had a lot of sand that was supposed to be blowing. It was difficult for me to maintain that catatonic state. I had to keep my eyes open and sand was always blowing in them”.

Bizarrely the film was called Spindlarna (The Spiders) on release in Sweden.

The New York Times review noted “….from the moment James Whitmore, playing a New Mexico state trooper discovers a six year old moppet wandering around the desert in a state of shock, to the time when the cause of that mental trauma is traced and destroyed, Them! is taut science fiction”. The Variety review was equally positive calling the film a “top notch science fiction shocker. It has a well plotted story, expertly directed and acted in a matter-of-fact style to rate a chiller payoff and thoroughly satisfy the fans of hackle-raising melodrama”.

Them! is the granddaddy of all giant bug films. Filmed at a time when worries and paranoia over the atom bomb were at their height, the film still delivers quite a punch even today. If not for the snobbishness and short-sightedness of studio heads, then who knows? Perhaps a full colour and 3D Them! could have become a blockbuster event, The Jaws or Star Wars of its day. As it is what we have is still a classic, not just of this genre but 50s cinema as a whole.

“When man entered the Atomic Age, he opened the door to a new world. What we will eventually find in that new world, nobody can predict”. 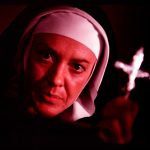 by Steve Kirkham.Network. Blu Ray and DVD The Monster isn’t by any definition a good movie, at a stretch it is kind of trashy fun… kind of. Joan Collins stars as 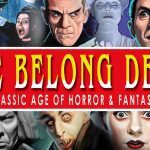