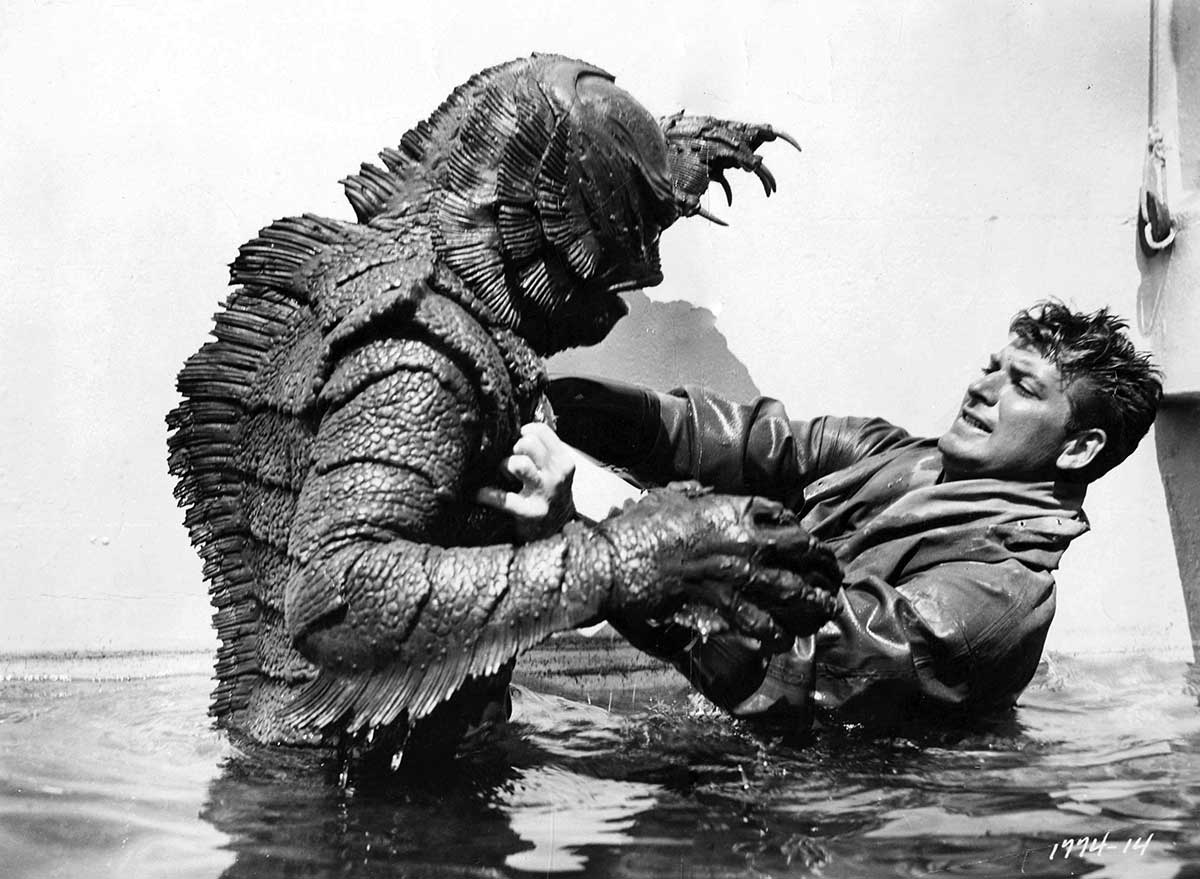 Appreciating Revenge Of The Creature

Even before it became a critical and commercial success on its original 3-D theatrical run, The Creature From The Black Lagoon was being groomed as the first (and only) Universal genre franchise in the wake of the monster-neutering Abbot and Costello cycle. Producer William Allen had coordinated a rethink with the film’s ending that allowed the title character to live on for potential sequels, and Universal were planning a follow-up before its 1954 release.

Revenge Of The Creature (1955) arrived a mere 16 months after the release of its predecessor, and was again shot in 3-D, though not widely seen in that format. It emerged with a memorable poster: showcasing a vast image of the Creature towering over a city in chaos while carrying a skimpily clad beauty. Jack Arnold returned to the director’s chair, in the same year that he made a strong contribution to the Atomic Arachnid sub-genre in the form of Tarantula. En-route to his masterpiece, The Incredible Shrinking Man (1957), the famously no-nonsense Arnold had swiftly established himself as the most proficient filmmaker working within the Hollywood monster movie machine, having started his short but classic genre detour with 1953’s exemplary It Came From Outer Space. Although uncredited, Ricou Browning returned to play the Creature in the underwater sequences, while taking a non-costumed role as a lab assistant. Meanwhile, the land incarnation of the Creature was portrayed by a different actor (Tom Hennessy), with the creature suit also differing somewhat from the original version: the head was the most noticeable alteration (check out the eyes closely and you’ll realise the first design was superior).

Revenge continues the development of the Creature character as a sympathetic, lonely, almost childlike figure constantly persecuted by insensitive humans in a fashion that makes him an aquatic successor to Karloff’s Frankenstein Monster. In the original, the Gill Man was pestered in his home environment, from which he is here insensitively wrenched to be held captive in America. Whilst imprisoned in “The Land of the Free”, scenes of him trapped in netting, crudely shackled and routinely tortured with cattle prods to test reflexes and intelligence leave us in no doubt as to who the real villains are.

In the Amazon, a bunch of manly American men, with liberal use of dynamite, are seen capturing said Gill Man (whose appearances, initially at least, are accompanied by the original’s Jaws-inspiring three-note motif) in a comatose state. Their discovery immediately becomes a publicity magnet and media sensation: the TV news dubs him “the greatest scientific story since the explosion of the Atomic bomb”. He quickly takes up residence as an exhibit at “Ocean Harbour”, a marine park in Florida where he has the edge over the distinctly sappy “Flippy the Educated Porpoise”.

Professor John Agar (back with Arnold in Tarantula A) is one of two men vying for swimsuit-clad ichthyology student Lori Nelson (three if you count the Gill man, with whom she shares oddly romantic moments as he did with Julie Adams in the earlier film) and he is studying the Creature to find out what makes him tick. Occasionally the movie stops dead in its tracks for typically wooden 50’s expositional dialogue exchanges like the following, which now play out like unused sketches from Austin Powers-style parodies:

Ichthyology? That’s a ten dollar word, how about explaining that to us?”

Ichthyology is the study of fish.”

Inevitably, the Gill Man escapes his shackles and causes the kind of havoc that leads to Marine Park announcements like “This is an emergency. The Gill Man has escaped. Return to your cars!” In this more cynical age, presumably the proclamation of “Be sure to check out the gift shop before leaving” would be first.

There are sub-plots about Nelson’s concern that her work-driven life is making her miss out on motherhood, while Agar says lots of manly stoic things like “I’m a man, I don’t have to make a choice” in between drippy closed-mouth kissing scenes that no one asked for when they filled in their Creature sequel request forms. A curious comic interlude at the Department of Animal Psychology features a super-clever baby chimp named Neil and Clint Eastwood as a dishy lab technician with fabulous hair and a dopey routine with mice. (Along with Agar, the young Clint was back in Arnold’s Tarantula). The scares fall back on familiar 50’s shock tactics of the kind that were still repeatedly trotted out during (and beyond) the American slasher cycle of the 80’s: hand-on-shoulder fake-outs abound.

Where this movie, given pace and energy by Arnold, really scores is in the Creature scenes. He remains an impressive monster, and there is genuine excitement to be had during climactic scenes in which he overturns cars, scares kids and tourists, knocks over his own cardboard likeness, kills Nelson’s dog and brutally hurls a man against a tree. The movie also extends the first film’s sexually charged swimming sequence, this time adding a man to form a peculiar and suggestive threesome, while the finale has a King Kong flavour as the Creature menaces Nelson in her hotel room and tries to cart her to the ocean before being shot by the usual gung-ho macho men. The poignant last scene has the Gill Man sadly recoiling into the sea, injured and alone, as ever.

This efficient movie’s Florida Sea World-type backdrop was appropriated, along with other basic narrative elements, by the much later Jaws III, though the Creature was again forced into a violent rebellion in John Sherwood’s The Creature Walks Among Us a year later. Both sequels are fine examples of swiftly-generated studio product, but Revenge has the edge.