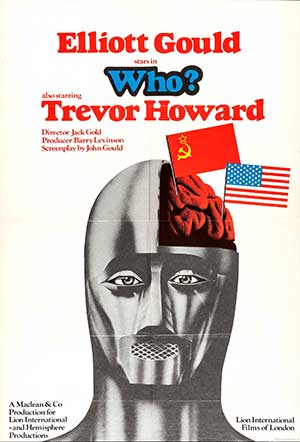 Who? Is a spy thriller with sf overtones and a touch of the Frankenstein’s about it. Produced in 1974 this bypassed a cinema release in the UK and I remember seeing it when it premiered on the Beeb (which I am reliably informed by my friend and movies on tv expert Sheldon Hall that it was first shown on the 24th of July 1976). This was unusual back then when cinema releases usually had a five year holdback before being shown on the telly – if memory serves the Radio Times made quite a big thing of it.

The film is basically one big mystery – an important US scientist Lucas Martino (believably played by Joseph Bova) has been captured by the East German military when his car crashes on the border. Held for six months – when he is returned there is one a problem. Because he was severely scarred and battered in the accident when he comes back he is half man half bionic man – his whole head is covered in metal, his left arm has been replaced and he has a new heart. Is he the same person or is a plant from the East German’s trying to discover secrets about the project he was working on. Elliott Gould plays the FBI man who is tasked with finding out if Roboman (as one if its alternate titles would call it) is the real thing.

He is understandably concerned – especially when he learns that the interrogations over the border were lead by their spy master Colonel Azarin (Trevor Howard replacing Curt Jürgens who dropped out at the last minute).

Based on a novel by Algis Budry this a fairly compelling if not exactly exciting conundrum of a movie which takes itself way too seriously. It’s fractured editing, which jumps backwards and forwards in time as the central riddle unfurls, makes for a slightly frustrating viewing experience even if it is cleverly done. Far too talky, even a car chase about an hour in never raises the thrill level above the humdrum. It’s all build with an unsatisfactory pay off.

A film of many appellations including Man Without a Face, The Man with the Steel Mask, the great Aussie alternate Prisoner of the Skull.

Despite the fact that it’s not difficult to see why this struggled to get a cinema release (even with Elliott Gould in the lead role), Indicator have done its usual job of loading up the extras:

You get two commentaries, which I have yet to listen to, an audio 1990 interview with director Jack Gold covering his career which plays over the movie (sorry not brought myself to give this a listen either); a 25 minute archival interview from a DVD release with actor Edward Grover where he talks about the film and the actors involved; a 20 minute comprehensive chat – The Man Behind the Mask – with the always engaging Kim Newman talking about the original Budrys book, his other work and the film itself; a very small image gallery of book covers, posters and video sleeves. 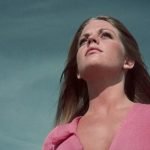 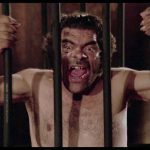