Having recently sat through the new Shane Black production The Predator – which looked lovely in 4K but added little to the mythos – it was fun to turn to Robowar an unpretentious rip-off of the original Predator, with a soupçon of Rambo and a bit of Robocop thrown in too and all helmed by Bruno Mattei (under his oft used pseudonym of Vincent Dawn).

A bunch of mercenaries – anti-guerilla experts calling themselves BAM (Big Ass Motherfuckers) – are sent into the jungle to find and neutralise Omega 1. They are lead by one Major Murphy Black (or Marphy as the end credits would have it and played by Reb Brown, one time Captain America in a couple best forgotten TV movies or even Yor: the Hunter of the Future from 1983).

What they don’t know is that their prey is a cyborg killing machine that has gone haywire and is slaying everything and anything that gets in its way. They save a girl from a local militia in a blaze of bullets – probably for no other reason than to add a bit of feminine charm to this testosterone heavy escapade. Can they complete their mission without being fried by the laser firing robotic menace – which looks more laughable than deadly as it appears to be a bloke dressed in biker leathers and a helmet enhanced with various bits and bobs stuck onto it. And as for the “robo-vision” – this is so badly pixelated that its a surprise he can even see where he is going let alone shoot anyone!

Lower your expectations and you may well enjoy this cheesefest – plenty of gunfire, wandering around in the wilderness, loads of grisly dead bodies, a groovy electronic score by Al Festa, wooden acting and a silly cyborg.

Extras: Italian audio with subs as well as the English

The limited edition release also has a CD of Al Festa’s electronic score – you lucky things! 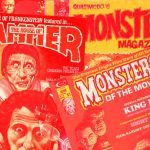 Story of a Collector

Suddenly I was confronted by a huge colour photo of Christopher Lee as Dracula, red eyes blazing, staring out at me from the cover of a new poster magazine. Since it was marked “For Adults Only”… 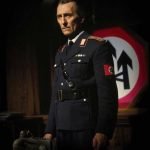